Avoid These Yoga Poses For A Healthy Pregnancy

Laura Finch on October 10, 2019
Laura is a yoga teacher who completed 200 hours of training. 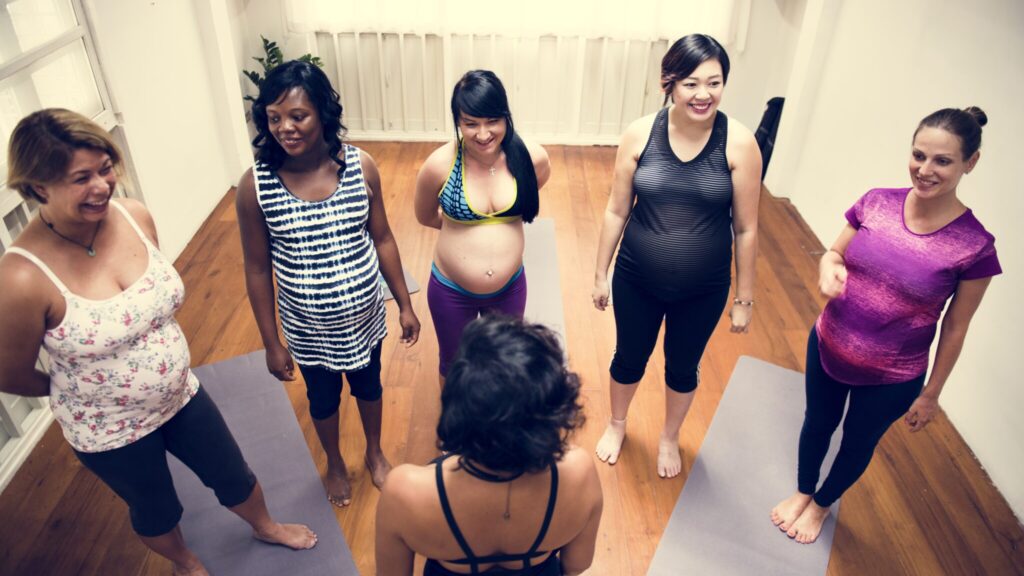 If you've just found out that you're pregnant, and wonder how this can affect your yoga practice, we've got great news! There’s no need to put it off until some other indefinite time.

In fact, prenatal yoga is actually good for you.

From reducing stress to relieving back pain and nausea, yoga during pregnancy can help you prepare for labor both physically and mentally. Besides, thanks to numerous yoga props and postures modifications, you can continue your yoga practice almost until the great day.

There's one catch though. Always consult with your doctor before engaging in any exercise to avoid complications during pregnancy. Even it has been a part of your daily routine.

This ultimate guide to yoga wear and equipment will help you find the props that will support you in your yoga practice all the way until the due date.

The available research shows that most of the common yoga poses are safe and well-tolerated by pregnant women.

However, as your body changes, so should your exercise routine. Some of the yoga postures can just get uncomfortable with time, but others must be modified or downright omitted to ensure a healthy pregnancy.

The following yoga poses are potentially unsafe during the prenatal period and are better avoided to minimize the risks of complications.

Even during the early stages of pregnancy when your body hasn’t yet undergone though any visual changes, you want to exclude some types of twists from your practice. In particular, deep closed twists.

Such poses as Half Lord of The Fishes (Ardha Matsyendrāsana) or Revolved Side Angle Pose (Parivrtta Parsvakonasana) compress the placenta and lead to the placental abruption – an uncommon, yet serious complication.

As your baby grows, twists will generally become difficult. Until they do, choose open twists instead. Such poses as Crossed Legged Twist (Parivrtta Sukhasana) or Revolved Wide-Legged Forward Fold (Parivrtta Prasarita Padottanasana) leave space for your belly and allow you to get all the benefits from twisting postures.

Similar to twists, you want to make space for your growing baby and avoid any compression in the belly area.

Crunches, Boat Pose (Navasana), and Twisting Plank are some of the no-nos during all three trimesters because they can decrease the blood flow to your abdominal area.

These can be easily replaced by other safe core poses. Planks, Staff Pose (Dandasana), and Balancing Table (Dandayamna Bharmanasana) are all effective movements that help build stamina and strength without any risks for the baby. The Full or Elbow Planks can also be modified by placing the knees on the floor.

Instead of keeping your feet together in Standing and Sitting Forward Folds (Uttanasana & Paschimottanasana), practice them with a wider stance (which will grow wider and wider as you become bigger). Make sure to bend your knees and keep a straight spine to avoid extra pressure on the lower back.

Naturally, after some time, you’d find the face down poses such as Cobra (Bhujangasana), Locust (Salabhasana) or Bow Pose (Dhanurasana) uncomfortable. This will probably happen after the first trimester.

Always listen to your body. If the pose causes strain on your abdominal area and doesn’t feel right earlier in the pregnancy, just swap it for a gentle Cat-Cow sequence (Chakravakasana).

Even if you’re a 'Jumping-into-Chaturanga Pro,' avoid any abrupt and jarring movements, especially during the first trimester.

This is the most fragile period when the embryos are trying to implant. Fast jumping in-between poses can lead to complications and make you feel more nauseous. Instead, gently step into your Plank or replace the Vinyasa with grounding and restorative poses. Later in the pregnancy, you probably won’t feel like jumping anyway.

The transition from Four-Limbed Staff Pose (Chaturanga) to Upward Facing Dog (Urdhva Mukha Svanasana) is generally safe until you feel comfortable with it. You can always modify both poses by placing your knees on the floor in Chaturanga and adding a pair of blocks under your hands in Upward Facing Dog. 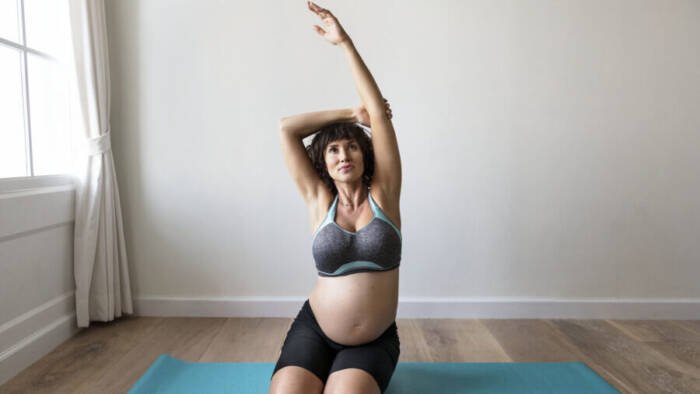 The general rule is that you can keep major backbends such as Wheel Pose (Chakrasana) in your routine if they have been the essential part of your practice before pregnancy. Some women are comfortable with the Wheel Pose until week 25 or so. But if you haven’t done the pose before, pregnancy is not a good time to polish your skills.

Inversions are generally safe anytime during pregnancy if they are performed correctly and if they were included in your yoga routine before (and, of course, you were confident and safe doing them).

The most obvious risk would be losing balance and falling. Use a wall or another person to prop you up in advanced inversions. Or replace them with a more gentle Bridge Pose (Setu Bandha Sarvangasana), Legs Up the Wall (Viparita Karani), Downward-Facing Dog (Adho Mukha Svanasana) – the opportunities are limitless.

You might feel your body becoming more limber during pregnancy. That is because of the hormone called relaxin, which is supposed to loosen your ligaments and prepare your body for childbirth.

It might be tempting to finally get into splits, but this is not a good idea. If you push yourself too hard, there’s a high risk of pulls, sprains and dislocated joints. Focus on gaining more strength and stability instead.

Yoga in a heated room has been proven to raise the core temperature. If you’re a regular hot yogi, the risk of overheating is smaller. But so far we have no studies that would prove that hot yoga can be safely (or opposite) practiced during pregnancy.

Besides, there’s always a danger of dehydration. So you might want to explore other yoga styles.

There are so many types of yoga out there! Check this easy guide to major yoga styles to find out what yoga your body and mind needs at this moment.

The main risk is that lying on your back for an extended period can compress the large vein that carries blood from the lower body to heart. However, as long as you find the poses on the back pleasant and comfortable, there’s no reason for alarm.

Moreover, you can always modify the poses by rolling onto your side or propping your back and head with a set of blocks and a bolster.

Exclude fast inhales and exhales, breath retention, including such techniques as Kapalabhati, Ujjayi, Kumbhaka. As an alternative, cultivate mindful and slow breathing throughout your practice and try the calming alternate nostril breathing, known as Nadi Shodhanam.

BONUS: Probably The Best Yoga Pose To Do During Pregnancy

The Yogi Squat, known in Sanskrit as Malasana, is probably one of the best poses you could do during pregnancy. And it is safe to practice during all three trimesters.

Malasana strengthens your lower body, opens the hips, stretches the lady area and generally promotes pelvic mobility. This all will make the delivery so much easier as well as prevent tissue tearing.

Prop up yourself with yoga blocks under the heels if they can’t reach the floor. You can also hold onto a bar or something steady in front of you and sit back into a squat. Use yoga blankets, bolster, or a pillow starting from the third trimester to support your hips.

Always remember that pregnancy is not the time for new fitness achievements. There are lots of changes going on, and this is your opportunity to start cultivating empathy towards and honor your body. Even if you’ve got years of yoga experience behind your back.