Laura Finch on February 7, 2020
Laura is a yoga teacher who completed 200 hours of training. 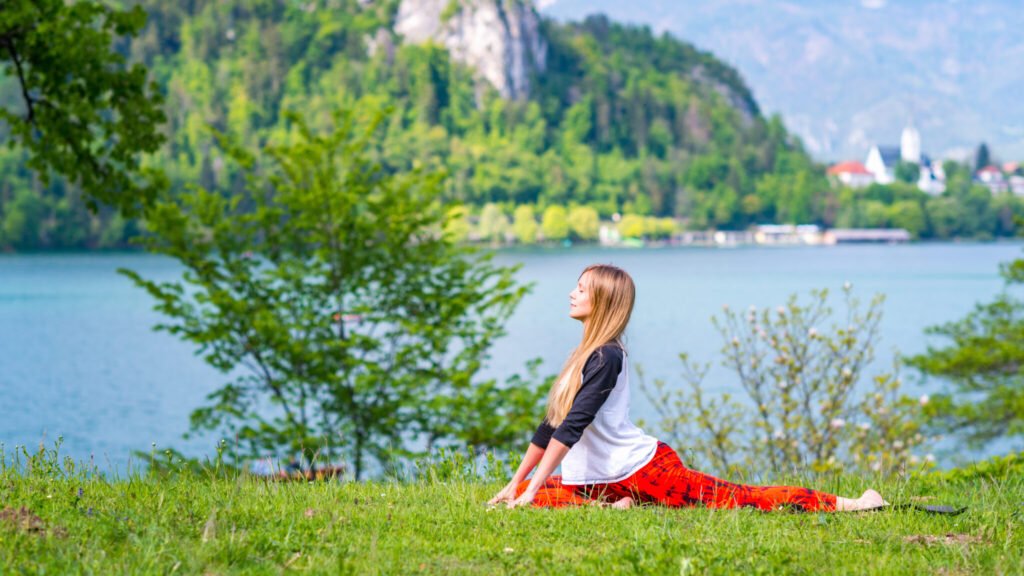 You can’t fully experience India without trying out yoga, even if you’ve never done it before. After all, the country is the cradle of the ancient practice. But if you’re a female, traveling to a place which is ranked as the most dangerous country for women in the world (outrunning Afganistan and Syria), and with the rape cases during yoga sessions running rampant, it is obvious that you might hesitate to sign up for the class.

In this article, I will tell about my experience of attending private yoga classes in Rishikesh, whether they are safe, as well as give some tips and red flags on choosing and attending yoga courses and retreats in India.

Yoga Capital Of The World

Rishikesh is a comparably small city (though it doesn’t seem like that once you step out of your tuk-tuk in the center) approximately 6 hours away from Delhi. It is located in the foothills of the Himalayas and offers a relative freshness of mountain air and the breeze of the Holy Ganges.

For years, Rishikesh has been popularized as the Yoga Capital of the World. Hundreds of tourists and enlightenment seekers are flocking to the city all year round to join yoga retreats with the hope to find answers, learn meditation, or just to stretch their stiff muscles in the birthplace of yoga. The very same Beatles even visited Rishikesh for a training course in a local ashram where they wrote some of their best songs, according to Lennon. 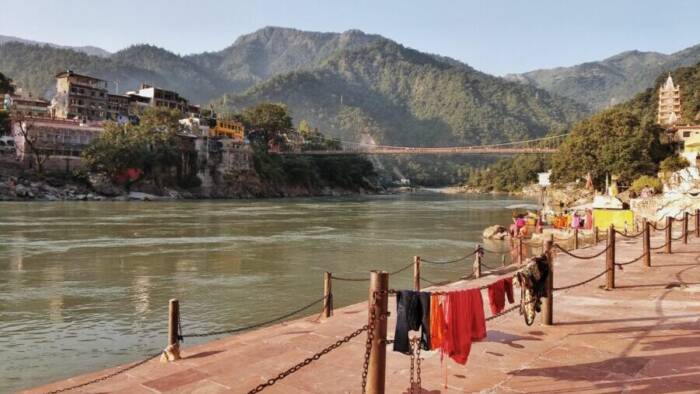 Rishikesh offers beautiful and peaceful scenery for your yoga practice and meditation.

In total, I spent 8 days in the city. My primary intention wasn’t to do yoga, but to escape the hustle-bustle and craziness of polluted Delhi. And to be frank, I was reluctant to take yoga classes in the first place.

If you do a little bit of research, you will learn that India has a long history of rape culture and women abuse. And if you think that stepping into a temple to take a yoga class with a guru makes you safe, then you are deeply mistaken. There are numerous cases of inadequate and sexually offensive behavior of yoga instructors, and even rape. Among the most recent ones, molestation of the 28-old US citizen during the yoga session, and a rape case filed by the Irish citizen.

Horror stories of sexual assault never end once you dig deeper. Like this one, for example. The founder of Agama School, the largest tantra school in the world, was allegedly accused of raping and abusing hundreds of his former employees and students for years, while some members of the staff were covering up the traces and blaming the victims. The school had a branch in India, based in Rishikesh, which closed this summer to ‘review its practices.’

My Experience Of Private Yoga Classes

Despite the bad reputation in the press, I felt that missing the chance of trying out yoga in the country of its origin is a once in a lifetime opportunity. I signed up for a regular drop-in group class at my guest house, thinking this would be the safest option as I already knew some folks from the hotel. But life works in mysterious ways. I was the only one showing up for the Ashtanga session.

I did feel anxious at the time. Tapovan is the most popular tourist hub in the city. Yoga centers and schools are springing up like mushrooms after the rain. At the same time, local authorities have no guidelines or control over these establishments. They don’t check yoga instructors’ qualifications and whether they received the necessary professional training to conduct classes.

So the thought of me spending the whole session with the instructor I knew nothing about didn’t make me feel very good.

I was lucky. To my relief, the yoga teacher showed up not alone, but with a woman, his wife as it turned out later. That was so handy because when I didn’t perform the asana correctly or needed a little help, it was his wife and not him adjusting my postures. It made me feel safe and very comfortable. So I booked more private classes later.

With the constant visual input, your body may be physically here doing asanas, but your mind would be wandering.

Whereas Western yoga now focuses mostly on the physical aspect of the practice, most of the courses you will find in India approach yoga as a spiritual path towards finding peace and happiness. Our every session started with brief spiritual guidance. The instructor was curious about my understanding of yoga and what it means to me. The questions which honestly I have never asked myself before. He taught me some breathing techniques, and how to focus on breathing during the practice.

Ashtanga yoga turned out to be not a vigorous and physically challenging style of yoga popularized in the West. Classical Ashtanga literally means “eight-limbed yoga” - the 8 requirements to achieve self-realization. Asana as a physical posture is only one of these requirements. Others are meditation, concentration, breathing, control over one’s energy, etc.

The most unusual thing for me was that I had to keep my eyes closed during the whole session. You can imagine how awkward it was to try and shape my body into a necessary posture with only oral instructions let alone balancing on one leg.

According to the instructor, shutting your eyes cuts you off from the outer world and helps you focus on your inner feelings. “With the constant visual input, your body may be physically here doing asanas, but your mind would be wandering,” he said. Observation is the key to a successful and satisfying practice. There are three stages of observation: preliminary observation before the actual practice, intermediary observation where you try to feel your body during asanas and understand what muscles have been working, and post-observation of the changes in your body after the practice. 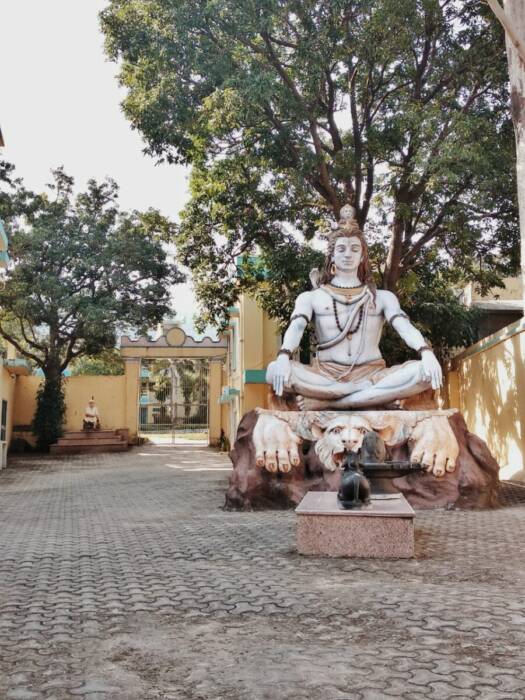 There are plenty of ashrams in Rishikesh that offer packages of yoga classes, accommodation, and meals on site. Take some trial classes and search for information online before committing to a long-term yoga course.

Only some time later I have found out that originally yoga was taught only through oral instruction and there is almost no evidence of yoga teachers physically adjusting their students before 1930s. This feature of yoga practice became common after Indian yoga teachers implemented this into their classes with Western students who believed these adjustments to be traditional and essential.

Looking back, I’m glad that I dared to step forward and have this experience. And even though, I’m not a big fan of India as a country (I have legitimate reasons for that that deserve a separate post), Rishikesh and yoga classes there have left the warmest memories in my heart.

I will not generalize and tell you that Rishikesh is super safe and you should pack your yoga mat and book your course immediately. Because it’s not. One of the things that India taught me is that you must be alert. Everywhere and at all times. Because somehow if you’re a westerner, especially fair skinned, the majority of people will try to fool you or scam you. If you just walk away, they will treat you as if you are to blame.

Yoga centers sometimes also try to pump money out of vulnerable newcomers by promising to give them the answer or cure the ‘pain of life,’ at best. Or at worst, by molesting female students and telling they will reach enlightenment through sex, as Agama Yoga founder did. So make sure you to consider these tips when choosing the yoga school or when first interacting with your yoga instructor and the staff.

I cannot emphasize this enough – but Google is your best friend in finding information about your future yoga school or ashram. And after researching, research again. You can find lots of reviews on the forums such as Reddit or even Trip Advisor. If you have a chance, contact the former students of the school.

My best advice though would be to go to your preferred city and attend classes at several schools. Yoga instructors are different, and everyone has their own style of teaching. Find the teacher which makes the atmosphere of the class welcoming and comfortable.

2) Avoid schools which promise to make you feel better

Or to cure your diseases, solve your problems, and give you answers. Because no one can deliver that. The spiritual path is yours to take, and no one can promise where it will lead you. And no, neither yoga nor tantra will prevent you from getting ill and none will make you healthy. Some schools are actually feeding their students lies such as ‘if you do yoga, you will never get cancer.’ This is bullshit, and please don’t fall for that.

And if you are not feeling the promised happiness after the course, they will most probably say that ‘it’s your fault’ because you haven’t applied yourself enough. 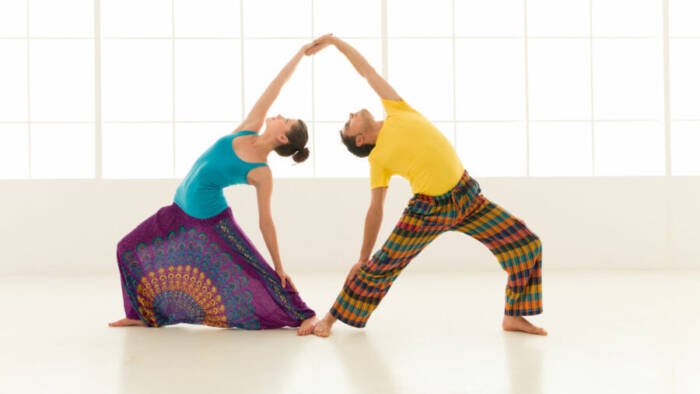 Harem pants do a surprisingly good job by keeping you cool during intense yoga practice and by hiding your body curves.

They might hang the pictures of their yoga teachers on the walls and ask you for additional donations. Or they might not allow you to question the spiritual guidance of your guru, laugh off your doubts, or become irritated or angry if you express opposing views or are not satisfied with something.

I had a safe experience of being corrected by a woman, but that doesn’t happen often. There is still a massive gender gap in the country, and the majority of yoga teachers in India are male. Be wary if your yoga master is too ‘touchy’ during the session. Don’t be afraid to speak up thinking that maybe yoga in India is like that. It is not.

5) Leave your leggings at home

Opt for harem pants that hide your curves. I personally hate this, but India is a deeply conservative country, and you are better off avoiding revealing and tight clothes. Wide pants will make you feel more comfortable during the practice, and the flowy material will cool you down during the heat.

6) Choose a small group class, instead of one-to-one

A private yoga session may be extremely rewarding. But it doesn’t mean that you have to stay with the teacher one-on-one. Some schools offer private yoga sessions with up to 3 students in the class. If you made friends in the hotel, invite them to try the small group class with you.

7) Be brave to walk away

If you don’t like the teacher, if you feel unsafe, uncomfortable or threatened, just walk away. Or maybe everyone is very nice and overly sweet, and the yoga teacher is professional, but you can’t get rid of the gut feeling that something is wrong and that you are gently forced into something. Stay alert and be brave to leave.

India is a mind-boggling country full of surprises. Keep an open mind, stay alert, and who knows, maybe you will end up having the time of your life!

What can we do to put an end to sexual harassment in yoga classes?

Isn’t the start of a new year great for focusing

Mood: In any uncertain life situation, put your le

During my pregnancy, I practically lived on my yog

Sleep is awesome. It doesn’t only reduce stress

I thought 5 weeks postpartum I'd be rocking on my