Yoga And Pilates Are The Same Thing

Laura Finch on October 6, 2019
Laura is a yoga teacher who completed 200 hours of training. 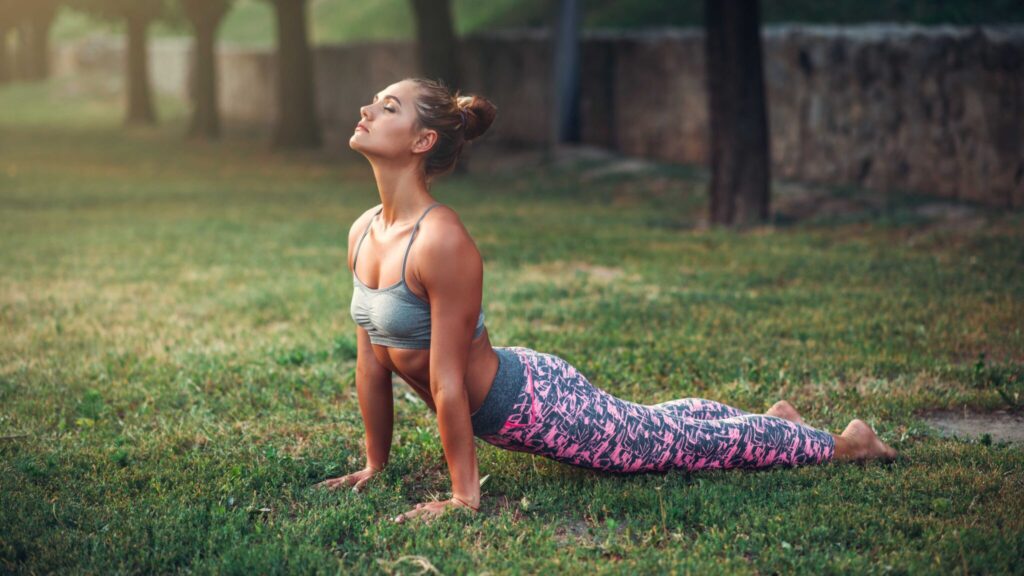 If I could get a coin every time I heard people saying that, well ... you know the ending – I’d have a cookie jar full of coins.

My friends, people in the gym and strangers on forums giving advice about the workout routine all are guilty of having uttered the phrase “Yoga and Pilates are the same thing.” The similarity in practices has even prompted the birth of the workout hybrids such as Yogalates and Yoga Pilates Flow.

I can’t blame them though. Both yoga and Pilates are advertised to promote better strength, endurance, flexibility, and balance; both are incredibly popular and at first glance, do look pretty similar. As we step into New Year full of purposefulness and determination to change our lifestyle, become more active, healthy and fit, it is all too easy to get lost in tons of new workout regimens for a new you.

But how did it happen that the ancient 5000-years old (or more) practice of yoga and the Pilates method developed by the Westerner Joseph Pilates in the 1920s are so often confused?

I decided to explore what makes yoga and Pilates so similar and what are the key differences between the two to help you make the informed choice for your new lifestyle change.

Surprisingly, the physical postures of yoga as we know it and Pilates have a common ‘parent’ - calisthenics.

Despite its ancient roots, the modern variations of physical poses (asana) in yoga are only somewhat 100 years old and are based mainly on the Western European calisthenics, according to Mark Singleton, the author of the book Yoga Body: The Origins of Modern Posture Practice. Not to mention the recently emerged types of yoga such as Power Yoga, Core Flow, etc.

Pilates exercise system was also developed nearly 100 years ago. The founder Joseph Pilates was an avid calisthenics, yoga, and tai chi practitioner, all of which are believed to have inspired the Pilates method.

Despite sharing the common source of the physical postures, the final goal of yoga and Pilates are strikingly different.

Yoga was initially done to prepare the body for an extended period of meditation. Considered by many as the path towards reaching the state of nirvana, bliss and happiness of realizing the oneness with the universe, yoga employs a range of practices. The physical aspect, also called asana, is just a part of balancing the mind, body, and spirit and attaining mental growth.

Apart from asana, different styles of yoga may or may not include meditation, chanting, specific breathing techniques, and hand gestures.

Pilates, on the other side, was created for the physical rehabilitation of soldiers after the war. It promotes physical growth and body efficiency above everything else. There is no evident spiritual side of the practice, but to bring proper posture, healthy spine and body functionality into everyday life.

Both yoga and Pilates are inclusive practices that involve low-impact exercises gentle on the joints, and that can be performed by people with chronic conditions such as arthritis, elderly, beginners, pregnant and people with past injuries.

The exercises generally focus on activating slow-twitch muscle fibers, which are responsible for endurance and longer performance, as opposed to the classic strength training (gym, for example) that activates fast-twitch muscle fibers used for explosive bursts of speed and strength.

This, of course, doesn't suggest that yoga and Pilates are not physically demanding or challenging enough to build muscle strengths and stamina. It means that the postures can be modified to correspond to your fitness level, flexibility, and goals – whether it’s recovery, attaining body suppleness or gaining strength.

Yoga is a much broader practice compared to Pilates. There are numerous types of yoga, and every person can find something that will strike a chord with them – from pumping blood in vigorous Vinyasa flow, unwinding and clearing your mind in Yin Yoga, to chanting and connecting to your body in the Kundalini Yoga class.

Yoga can be slow, yoga can be fast, yoga can be hot and sweaty, yoga can involve repetitive movements every single class or flow in a completely unexpected direction every time.
Some styles of yoga such as Ashtanga or Vinyasa are not recommended for complete beginners or for people with injuries or heart problems due to their intensity and speed.

On the contrary, traditional Pilates doesn’t have types of classes which are specifically aimed at the elderly or people with injuries. Experienced and certified instructors can offer a modification for every posture depending on your past fitness and physical trauma history: from the easiest level accessible to everyone to more advanced.

The class is also more consistent. The exercises involve rhythmic, precise and isolated movements repeated in sets. They might change in the intensity and speed, but the traditional poses are performed supine or lying on the side so often you know what to expect from the exercise and the environment. 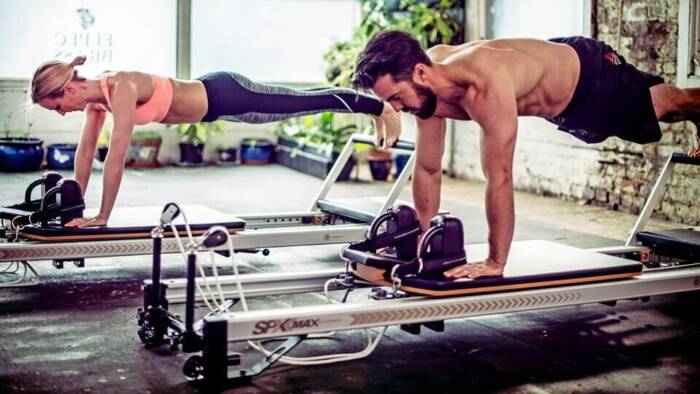 The Reformer, perhaps the most popular piece of Pilates equipment / Credit: Runwaypilates.

Yoga and Pilates place a strong emphasis on body-breath connection. Correct breathing is at the core of both practices.

In Pilates, you will use Lateral Breathing aka ‘ribcage’ breathing that directs the air to the lower lobes of the lungs and involves minimum belly movement. The core and abdomen muscles should always be engaged. Breathing in Pilates helps support and increase the effects of the poses, provide the muscles with oxygen and improve blood flow. The breathing pattern is consistent during the whole class.

Unlike in Pilates, yoga generally involves a set of different breathing techniques – pranayama. Breathing is done with the belly rather than with the ribcage. The primary purpose of breath is to direct it to the tense and tight parts of the body to help them relax, to control the energy flow. Some types of yoga dedicate a special chunk of the class just to the breathing techniques.

Both Pilates and yoga offer plenty of health benefits: regular practice will improve muscle tone and strength, increase flexibility, help with the back pains and proper posture, fix the imbalances in the body, and much more.

You can tone your muscles, build strength and gain flexibility with Pilates, but the primary objective is to strengthen your core also referred to as the Powerhouse. The Powerhouse includes the area from the lower ribs to the hip line. Strengthening these muscles promotes a strong and healthy spine, improves posture and balance. All the moves in Pilates are coordinated with the mind, spirit, and breathing and originate from the core – the Powerhouse.

Yoga, while bringing the same health benefits, mostly emphasizes joint flexibility, balance, and peace of mind. Mindfulness lies at the core of the practice no matter what type of yoga you do, whether it is sweaty Bikram or softening Restorative yoga. Many yogis come to yoga not for the muscular physique or attractive looks but for the stress relief, relaxation and in search of the better overall well-being.

Pilates and yoga both involve mat work and can be done without any special equipment, anywhere and anytime. If you’ve got a patch of green grass nearby, you don’t even need a workout mat for your practice.

When the props are involved, Pilates makes use of a range of workout equipment: from small and portable resistance bands, weights and magic circles to large ‘machines’ such as Reformer and Wunda chair. These are generally used for the advanced classes.

Yoga doesn’t involve any studio apparatus, but the practice can be enhanced with various small props such as yoga straps, blocks, bolsters, and wheels that can help you advance in your yoga practice as well as modify the postures for beginners.

Wondering how yoga is different from gym training and which is better? Check out this article about yoga vs gym.

Which Practice To Choose: Yoga Or Pilates

There is no way of telling which practice is better and more beneficial – it all depends on your preferences, goals and expected results.

Regular Pilates workout will bring visible physical results and increased strength faster than the traditional slow-paced Hatha Yoga, whereas the latter will lead to better flexibility, balance, and concentration in a shorter term.

On the contrary, Yin Yoga, which is not aimed to improve your muscle tone in the first place, targets deep connective tissues and fascia to help with faster muscle recovery, flexibility and will melt your stress away.

The rule of the thumb is to go for Pilates if you’re searching for physical benefits such as strong core and increased strength. Pick yoga if you’re in need of relaxation, stress relief, and mind-body practice.

It is always a good idea to pop into several classes of Pilates and different types of yoga to see what works for you. It was actually Pilates that brought me into yoga many years ago. Though always dreaming about starting yoga, I found it to be too intimidating at first. Pilates gave me the confidence and taught me the basics of breathing, body alignment as well as the core strength needed to start the fulfilling practice leading towards mindfulness and better mental health.