The Ultimate Guide To Smudging

Laura Finch on November 15, 2019
Laura is a yoga teacher who completed 200 hours of training. 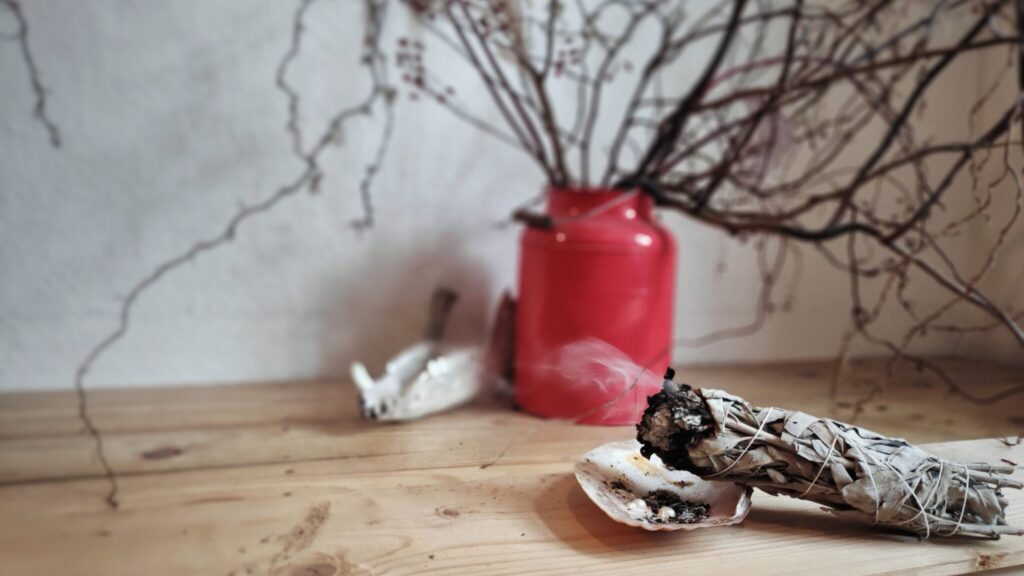 The ritual of cleansing with smoke is not unique to one culture.

From the mystic ceremony of saining in Celtic folklore to smoldering dried mandarin peel in Chinese feng shui tradition and swinging thuribles with frankincense in a Christian church, ceremonial burning herbs and resins is a global phenomenon widely practiced around the world.

There are various names for smoke ceremonies unique to each culture. But the term you'll probably hear most often is smudging.

So let's explore what smudging is, how (and why) do it, and what on earth it has in common with yoga.

There's a long and persistent debate about whether smudging (and in fact, just using the term smudging) is cultural appropriation. I'm not a Native and not even close to having any Ingenious relatives. So I don't feel like I have any right in the conversation. In this article, I am using the term smudging as an equivalent to smoke bathing or smoke cleansing.

Smudging is a ceremony of cleansing a place, an object, or a person from negative and stagnant energy and inviting "good vibes." Smudging is done with a smoldering smoke from burning dried medicinal herbs, plants, and resins.

The practice originates from Native American traditions. Indigenous peoples believe the smoke from specific herbs restores the energetic and spiritual balance. They use it for praying and healing ceremonies as well as to purify spaces, bodies, and objects, restore mental clarity, and bring vision.

Thanks to the New Age metaphysical society, the practice of smudging has recently come out of the fringe and into the mainstream.

Modern healers, lightworkers, intuition experts, witches, pagans (and god knows only whom else) smudge for the purpose of:

You don't have to be a healer, an intimacy coach, or a witch to try smudging. You can just be a yogi.

So how does smoke cleansing practice and yoga relate to each other?

Well, according to yoga philosophy, our whole world is made of vibrations. You and me, the air, the sky, our minds, and everything visible and invisible continuously vibrate.

The way we experience life and how we feel depends on our vibratory frequencies. Higher vibrations are considered light and happy, whereas lower ones are dark and heavy.

Ancient yogis believed that out-of-rhythm vibrations in the body are the main culprits for diseases. They clog your energy centers chakras and prevent the vital energy prana from flowing smoothly and your mind and body from functioning in harmony.

Everything you do, eat and think, everyone that surrounds you can affect your vibrations.

We all prefer to stay healthy, be happy, and feel good, don't we?

That's why we should all be doing some work to keep our vibrations high (or raise the vibrations if they are low).

How are you vibing right now?

This vibration-based view of the universe is kinda like an Indian version of feng shui. If you're not familiar with the term, feng shui is a Chinese pseudoscience of controlling your energy by manipulating your environment.

There are many ways to raise your vibrations.

Yoga and meditation, for example, is one way of doing it. These spiritual practices help cultivate focus and bring a feeling of peace and grounding.

Surrounding yourself with light, beauty as well as physically cleaning your home space is another way of raising your vibratory frequency.

But sometimes physically cleaning your house is just not enough. That's where the smudging comes in.

Smoke bathing and yoga is a perfect marriage. The lingering fragrance from burning herbs amplifies the intention set for yoga practice and aids with the mood. It also helps clear space from stagnant energy so that you could fill it with a good one by practicing yoga.

There're no right or wrong days or time to cleanse your space or yourself, really.

But there are some crucial times when burning herbs can be most helpful. For example:

Smoke cleansing is a highly individual practice. Some people advise cleansing your space at least once every few months. Others do it every day as a part of setting the intention for the day.

Starting a new venture or job is a great time for smoke cleansing ritual.

What Herbs To Burn

Native Americans use four sacred herbs in a smudging ceremony:

Each has its own purpose and properties. For example, tobacco is believed to be the gateway to the spiritual world and is often used as an offering. Sweet glass is used for purification and calling in good Spirits. Cedar – for protection and sweat lodge rituals. (You can read more about the use and properties of sacred herbs in this article).

Among all four herbs, sage has become a go-to plant for modern witches. It has become so popular that you don't even need to hunt it down in herb stores. You can easily find it in the least expected places (like Amazon).

In fact, the practice of burning sage resulted in overharvesting the plant in its natural habitats in California. The commercialization of sage also deprived Ingenious people in the area of easy access to the herb they've been using for their spiritual rituals for centuries.

So keep that in mind if you're planning to try out smoke cleansing. Remember that there are many other herbs local to your area you can use apart from sage. 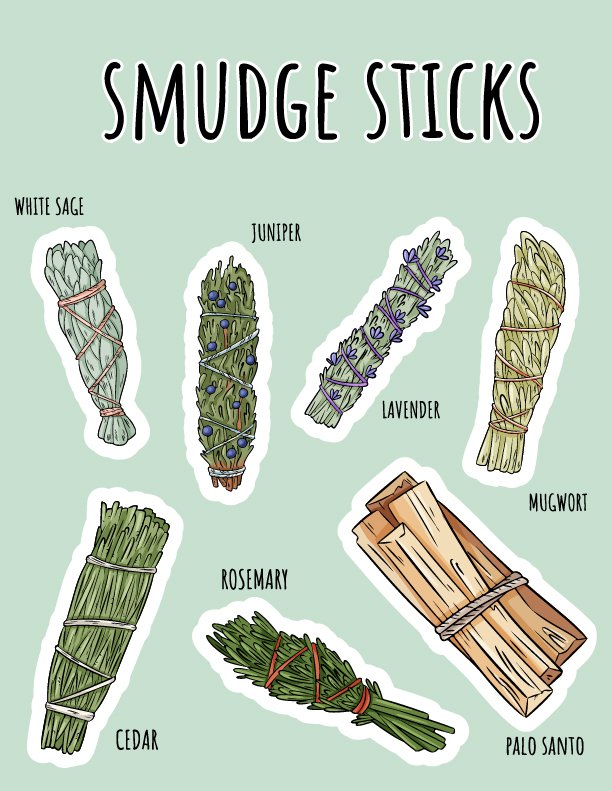 Just some of the herbs (plus their benefits*) that you can use for smudging ritual:

*People often say that this herb does this, and the other is used for that. But it's highly personal and frequently anecdotal. What worked for your friend won't necessarily work for you.

The list is not exhaustive. Basically, almost any herb that grows locally in your garden can be used for smoke bathing if the intention is right.

If you have the possibility, it's always better to gather your own herbs (or even grow them!) and make your own smudge bundle than to buy it.

According to Native American traditions, gathering herbs is a part of a smudging practice. It gives you a chance to talk to a sacred plant that's gonna give up its life for your smoke cleansing ceremony.

There are added mental benefits in using the herbs of your own labor. You're dedicating time and energy to the process rather than mindlessly adding a sage bundle into your cart and having it delivered to your doorstep.

Besides, who knows how the person collecting the herb was feeling. Ingenious peoples believe the gatherer's bad thoughts or mood can negatively affect you during the ceremony. 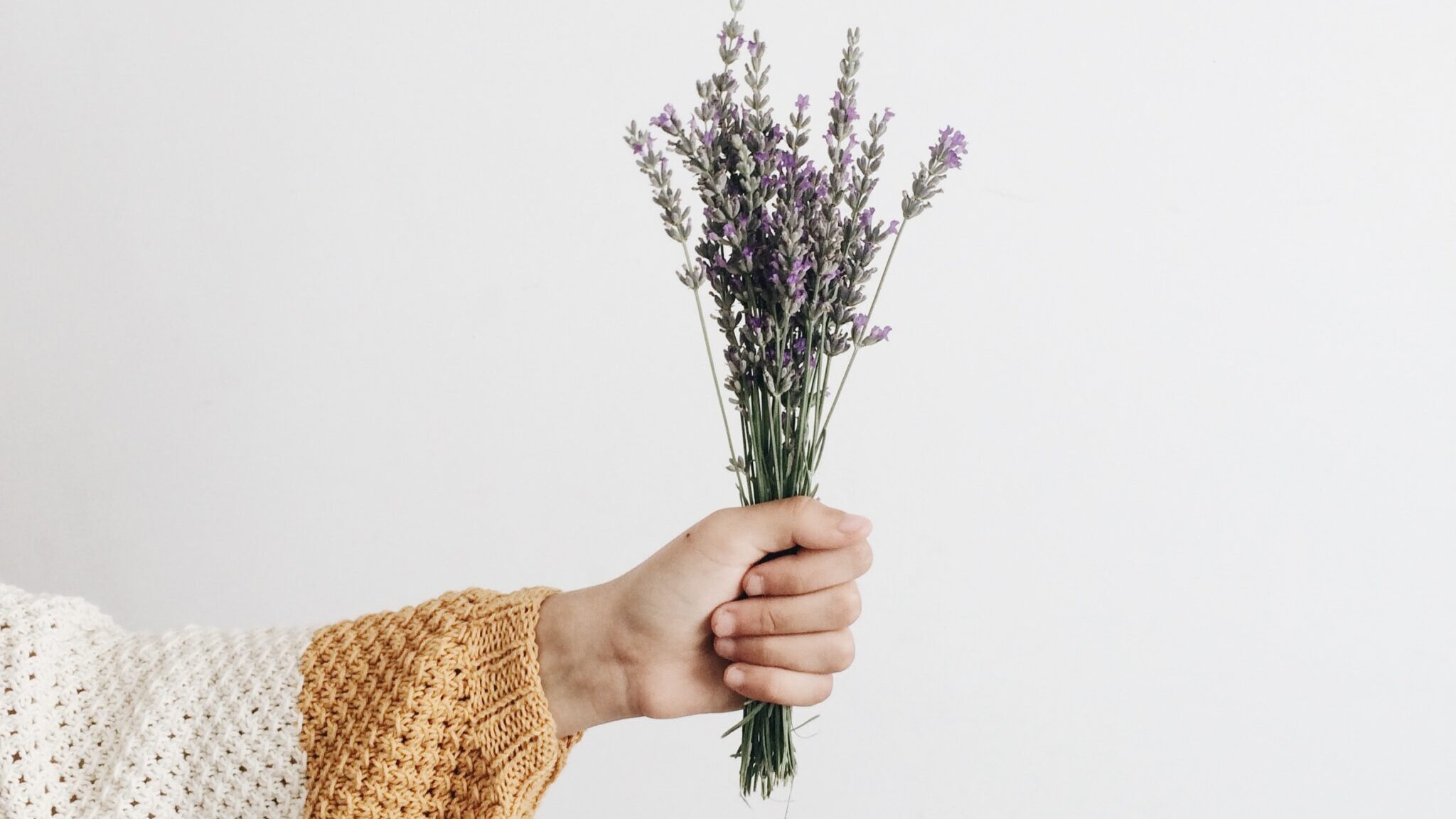 Try growing or at least gathering your own herbs for smudging.

How To Prepare For A Smoke Cleansing Session

Preparation can be boiled down to a simple two-stage process: getting your tools ready and your mind right.

1. Dry herbs. Get your loose dried leaves or a smudge stick (herbs bundled together with a rope; aka smudge wand or smudge bundle). You can use one herb only or mix different herbs into one smudge stick.

2. Burner or fire-proof bowl. You'll need a plate or some sort of heatproof container to rest your smudge stick on during the ceremony. It can be a clay plate, an ashtray, a seashell. I suggest that you put a tiny bit of sand on the bottom – this will help to put out the smudge stick at the end of the ceremony.

3. A lighter/box of matches. To light up your dry herbs.

4. Optional: A feather or a smudge fan. To direct the smoke and keep your herbs smolder.

Clean the place you're planning to smudge and open the windows. This will give the smoke and negative energy a place to exit your house.

Sage Smudge Spray With Lavender For Cleansing and...
(580)
Check the Reviews

Lighting up a sage stick and having a glass of wine, hoping it would bring clarity and good energy just won't cut it.

What makes smoke cleansing different from ordinary incense burning to make your house smell nice is setting the intention (just like we do in a yoga class).

You can also start reciting a prayer or a mantra that will reflect your intention. There are no correct or wrong prayers. Just say whatever is in your heart and on your mind.

How To Smudge: 6 Essential Steps

There are different protocols for smoke bathing, and they might seem intimidating at first.

Here's a short breakdown of the most important steps:

Don't smudge the place if you don't know why you're doing it. Also, make sure you're in a peaceful state of mind. Allow yourself to have plenty of time without rushing anywhere.

2. Gather all your smudging tools.

3. Start at the front door of your home and light up your herbs/smudge stick. Keep your heatproof bowl under the smudge stick to collect any falling embers. If you're using loose leaves, just put them in the bowl and light them up.

Blowing out the flame is considered disrespectful. Take your time until the fire subsides, and herbs start to smolder.

4. Smudge yourself and any other people that are in the room. Direct the smoke with the hand or with a feather/fan onto your body.

5. Cleanse your space. Move slowly and mindfully in a circular motion, wafting the smoke into all nooks and corners, closets, and hardly-accessible places. Pay special attention to objects you're regularly using, such as your laptop or a phone. Remind yourself of your intention or your prayer while moving around.

Some people smudge in seven directions. Starting from the east and move clockwise to the south, west, north. Then smudging up, down, and within while holding the hands on the heart.

6. When finished with cleansing, put out the smudge stick in your burner or let it smolder while you meditate, do yoga, or journal. You can also just sit and breathe for a few minutes.

The custom suggests that you bury the stick and ashes into the ground - a symbol of getting rid of all the negative energies you cleansed.

Open the windows and doors when smudging. You don't want to turn your house into a gas chamber.

It sure is, especially if you leave your lit smudge stick unattended...

All jokes aside, though. Sacred or not, smudging and any incense burning involve smoke. So far, no smoke on this planet is good or at least not harmful to our lungs.

Whenever you burn something, inside or outside, you create particulate matter (PM) – a mixture of solid and liquid particles suspended in the air. PM is highly dangerous as it gets deep into the lungs and bloodstream and with time, may cause a range of health issues. (Read more about PM and pollution here).

We don't have high-quality scientific studies that prove that incense smoke causes serious complications such as cancer or anything similar. But it has been recognized as a risk factor for developing respiratory and airway diseases. See these links for reference - Study 1, Study 2.

Without further fearmongering, I advise you to follow these five smudging tips to stay on the safe side:

1. Avoid inhaling the smoke when smudging. Besides, avoid the herbs smolder for a long time. You don't want to turn your room in a smoking chamber.

2. Don't burn herbs if there are pregnant women, young children, or elderly people around.

3. If you suffer from any environmental allergies, asthma, or the like, consider replacing smoke cleansing with essential oils, spray mist, or anything else that doesn't involve smoke.

5. Know what you're burning. Choose natural products without added chemicals or aroma enhancers.

Have you ever tried smudging? Share your experience in the comments!

Nothing special, just me falling after the fifth a

If you're bound to a chair all day long, Standing

Are you holding onto too much negativity in your l

TPE, PVC, NBR... All those terms giving you a head

"I got myself a yoga wheel to build strength." - S