Learn These Common Terms To Survive Your First Yoga Class 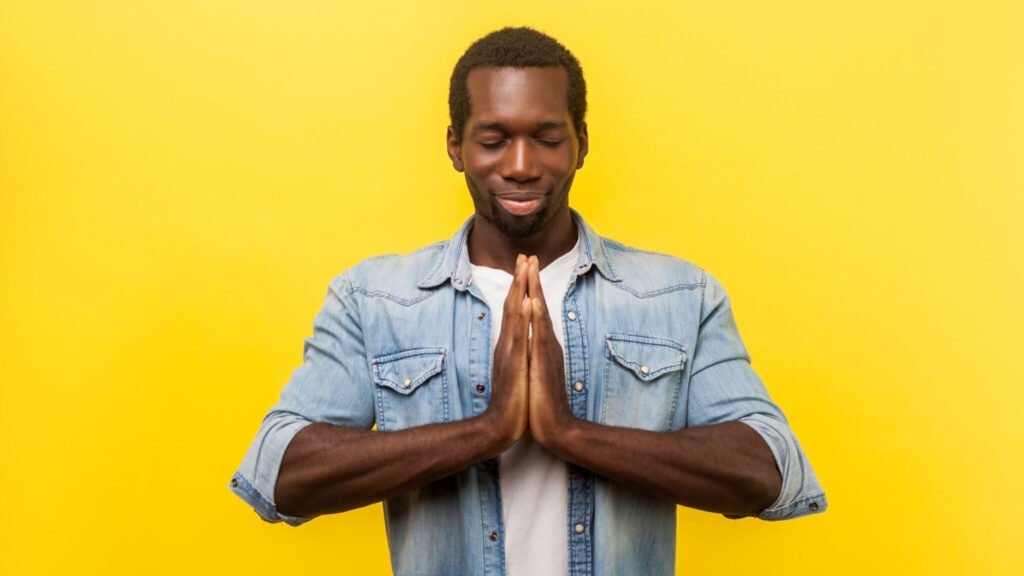 The fact that yogi teachers might often use a lot of Sanskrit terms and weird vocabulary during the class surely adds to the already existing anxiety of stepping into the studio for the first time.

"Breathe into your hips" or "engage your bandha" often confuses and sounds like nonsense to the newcomers. So instead of relaxing and focusing on the pose, you may end up looking around the room for physical clues and, alas, find none.

But fret not! Westerners have replaced a lot of concepts with the translated ones. All of the yoga poses, for instance, have an English equivalent, and some yoga instructors use English terms exclusively to aid beginner students.

However, it's always nice to familiarize yourself with some basic terms and their meanings. Some of them you've most probably heard already outside of the yoga class. 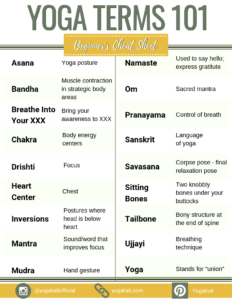 The classical language of yoga.

From Sanskrit, yoga means "union" or "yoke." Yoga is traditionally understood as the set of physical, spiritual, and mental practices to awaken our consciousness and connect to the higher and eternal Self.

The word we all heard but never understood. It translates from Sanskrit as “I bow to you” or “The divine in me bows to the divine in you.” Namaste is used at the beginning/the end of the yoga class as a sign of gratitude and respect.

Did you know that Namaste has actually no connection to yoga? Read more about the Sanskrit word here.

Traditionally translated as a "seat," the term is now used in the context of a yoga class to refer to any physical posture. By the way, in Sanskrit, each individual pose ends with -asana (e.g., Balasana or Trikonasana, etc.)

Translated as the "Corpse Pose," it is often considered one of the most challenging yoga postures. In Savasana, one lies flat on the back, eyes closed, with legs and hands relaxed. What might seem like a nap or yoga for lazy can actually turn out more difficult than holding an active pose.

You'll be surprised at how much effort it sometimes takes to quiet your mind and lie still.

Group of yoga poses (asanas) when your head is located below the heart. Some examples of inversions are Headstand, Shoulderstand, Downward-Facing Dog. Inversions are great for building strength, improving blood circulation and increasing concentration.

Check out these must-know yoga poses for beginners.

Prana translates as "life force" and yama as an "extension." Pranayama means the awareness and control of breath through specific techniques.

Ujjayi is a type of pranayama. This breathing technique is also known as “ocean breath” or “victorious breath and pronounced as oo-jai. It involves deep inhales and exhales through your nose while slightly constricting the back of your throat. The breath, thus, becomes audible and helps relieve tension and maintain rhythm in the yoga practice.

In Sanskrit, the word signifies "seal," "mark," "gesture." Mudras are used during breathing practice or meditation to direct the flow of prana (energy).

A mudra can involve the use of the whole body or a separate body part (eg., head, or hand). Hand mudras are the most commonly used type in the context of the yoga class.

From Sanskrit, the word means “lock.” “Engaging the bandhas” in modern understanding means contracting the muscles in certain strategic areas of the body.

Being able to activate bandhas has many benefits. It can help hold the yoga pose (for example, fight gravity in arm balances and inversions), prevent injury and stay focused. It is believed that when we engage our bandhas, we lock the vital energy prana and gain control over it.

There are three major bandhas in the body:

We often tend to skim the studio, watch other people in the class and compare ourselves to them during challenging yoga poses. “Finding the drishti” means focusing our gaze on one point. It not only helps with the balance and alignment in yoga poses but promotes self-awareness.

Mastering the drishti allows us to disregard the distractions and focus on the present moment, no matter how difficult or uncomfortable it may be.

From Sanskrit, chakra means the “wheel.” Chakras are part of our energetic body – the one we can’t touch or feel. There are seven chakras in total. They run along the spinal column: from the base of the spine to the crown of the head.

Think of chakras as a kind of energy centers through which the vital force flows. Whenever the chakras are blocked or misaligned, the flow of energy is disrupted. This can lead to various mental, emotional, or even physical issues.

According to Hindu beliefs, yoga, along with meditation and other mindful practices, can help unblock and open the chakras and help keep the body and mind healthy.

If a yoga instructor tells you to draw the palms at your heart center, they mean you should bring the palms to your chest.

A sound, word, or a phrase that can improve concentration during meditation and bring mental benefits when repeated many times. You can say mantra out loud or repeat it in your head.

Also pronounced as A-U-M, Om is considered one of the most sacred mantras in Hinduism. In the context of yoga, it is often chanted in the beginning or at the end of the class.

According to Hindu tradition, Om sound contains the whole universe, but there’s no precise definition of it.

The phrase “ground your sitting bones” means you should sit straight and distribute the weight of your body evenly between two knobbly bones that stick out of your pelvis.

It might get tricky to find your sit bones during your first yoga class because of the muscle tissue. To do this, try gently rocking back and forth while seated on the hard surface until you feel the protruding bones.

The tailbone is the bony structure at the end of the spine. “Tuck your tailbone” means you should engage your lower abs and tilt your pelvis slightly to restore the natural curvature of the spine and prevent your lower back from overarching.

When a yoga teacher asks you to “breathe into your hips” (or any other part of the body), it means you should bring your awareness and focus into the part of the body you feel the tension in.

What if you don’t feel like delving into yoga terminology? That’s absolutely fine!

It’s been years since I started my yoga practice, and I still don’t know lots of Sanskrit terms for yoga poses. That doesn’t make me feel any less of a yogi. And you shouldn’t feel bad about it too. There’s no harm in asking your teacher for help whenever you don’t understand something.

If you are, on the contrary, interested in Sanskrit, this list might look overwhelming. Don’t worry. You’ll have plenty of time to catch up on some yoga slang, and most probably you’ll be speaking like a yogi sooner than you think.

Do you have any questions or suggestions about the post?

Let us know in the comments!